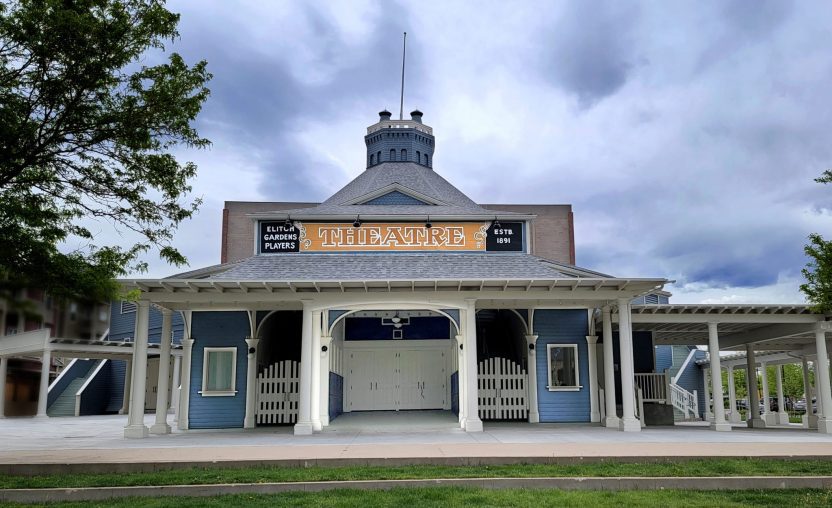 About the tour: Explore the historic theatre that has been a vital part of Colorado’s cultural landscape since its first season in 1891. Once home to the oldest summer stock theatre in America, it hosted the state’s first moving picture in 1896 and delighted Denver audiences until its last production in 1991. Legendary performers in theatre, film and television passed through this iconic American playhouse, including Douglas Fairbanks, Grace Kelly, Edward G. Robinson, Cecil B. DeMille, Robert Redford, Debbie Reynolds and Vincent Price. See how the Historic Elitch Gardens Theatre Foundation is working to restore the building and recognize its legacy as a nationally renowned venue for the celebration of the arts.

About the building: Denver architects Rudolf Liden and Charles Lee designed the Historic Elitch Theatre, completed in 1891, in the “stick” or “shingle” style that emerged in the late 19th century. The theatre featured an open two-story veranda surrounding the auditorium, supported by simple posts with knee braces. The backstage building enclosed the western side of the theatre, and a signature castle-like cupola crowned the roof. Over the next quarter-century, modifications to the stairways and entrances—and the eventual enclosure of the verandas—resulted in the theatre’s most durable and well-known configuration. The roofline, octagonal floor plan and general auditorium arrangement varied little from the 1891 design until the construction of a new backstage building in 1954.

About the tour guides: Greg Rowley, MNM, Historic Elitch Gardens Theatre Foundation President, enjoyed a 20-year career in social services and nonprofits before moving to work in computer programming and creating software for nonprofits. Following Hurricane Katrina, the Red Cross used Greg’s software to case manage the needs of the displaced residents at the Houston Astrodome. While he now works with his family’s business, Greg enjoys the opportunity to put his Master of Nonprofit Management degree to good use as a board member for the Historic Elitch Theatre.

Kelly Jo Eldredge, Historic Elitch Gardens Theatre Foundation Theatre Tours Coordinator, is the Department Chair of the Theatre Arts & Dance Department at Red Rocks Community College. She enjoys teaching a wide variety of theatre courses and directing many productions at RRCC. She received her master’s from New England Conservatory in Boston and began her professional career in opera. Kelly Jo moved to New York to pursue a career in musical theatre and has performed lead roles on national Broadway tours and in regional theatre throughout the U.S. and Canada.

Accessibility: Wheelchair access is available for the theatre and stage. Opportunities for seated rest will be available throughout the tour.